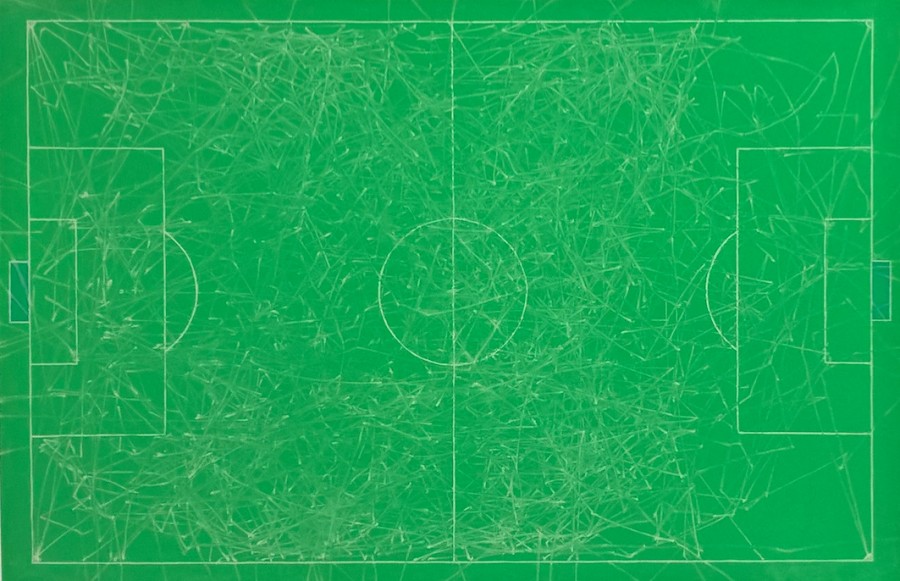 Public presentation of the silkscreen at Lendroit éditions.

To pay tribute to the artist Guénaël Hautbois, who died in August 2017, Le Village art center, site of artistic experimentation in Bazouges-la-Pérouse, is organizing three highlights around his work.

From September 9 to 30, a retrospective exhibition entitled Whole and parts will offer a non-exhaustive overview of the painter's artistic universe. On September 12, a silkscreen print edited from the France 98 – coupe du monde pictorial series that the artist produced in 1998 at Le Bon Accueil art center in Rennes will be inaugurated at Lendroit éditions. To close this tribute, as part of the Open House of Artists' Workshops of the City of Rennes which will take place from November 15 to 18, Gilbert Dupuis will present in his studio a selection of works which represent the artist's work.

Guénaël Hautbois was born in Rennes in 1971. After studying at the European School of Art in Brittany and a stint at the Villa Arson in Nice, he exhibited in Monaco, Nice, Douarnenez, Paris, Bignan, Bazouges-la- Pérouse and Rennes and took part in the development of the Rennes art center Le Bon Accueil at the end of the 90s.

In 2012, he joined the Fonds Communal d'Art Contemporain de la Ville de Rennes thanks to the acquisition of one of his works. In 2015, he produced Figures, a permanent installation created for À ciel ouvert, the tour of works in the public space of Le Village art center, an experimentation site in Bazouges-la-Pérouse. His pictorial work is made from themes borrowed from the history of art such as anamorphosis, the double, the reflection, or the vanity and is designed from photographs of amateurs mostly from his circle. family.

Guénaël Hautbois has long been marked by works by Tintoretto, Hans Holbein the Younger and artists such as On Kawara, David Hockney and Gerhard Richter. His landscapes and portraits, with their spirited and delicate craftsmanship, question the figure and place of man in the face of the inexorable passage of time.